In fact, when the fifth generation iPad Air came out, we were a little concerned that it was encroaching on the 2021 iPad Pro territory when it comes to pricing and features on offer. So how are things when the new and fresh Pro model hits the market?

We’re not ready to give a verdict on the iPad Pro (2022) yet, but here’s how we see things based on official specs and features.

It should be noted that since the release, these prices have risen sharply in the markets of European countries, which, according to analysts, is caused by global economic pressure.

It should be noted that these prices are for 128 GB Wi-Fi only models, enabling mobile connectivity and increasing memory (256 GB, 512 GB, 1 TB and 2 TB) will significantly increase the cost of tablets. At its peak, the iPad Pro 12.9 (2022) with 2TB of storage and cellular connectivity will cost you $2399… 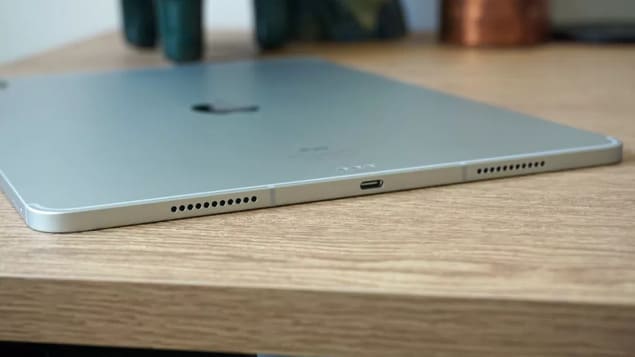 The iPad Pro and iPad Air 5 do have a similar design. Both have flat fins and sharp all-aluminum bodies with the same screen bezels.

The iPad Air 5 is slightly lighter than its Pro sibling, however we’re talking about 416 grams versus 466 grams, so you’re unlikely to notice the difference in your hand.

All three tablets ditch Apple’s old squeaky Lightning connector in favor of a universal USB-C port, although the Pro models use the fast Thunderbolt 4 standard. You won’t immediately notice the difference in biometric authentication systems either. And while the iPad Air 5 hides the Touch ID scanner behind the power button, the 2022 iPad Pro comes with Apple’s brilliant Face ID system, which relies on the front-facing camera and sensors.

One of the ways the iPad Air 5 hits back at its professional counterpart is with its array of colors. The more affordable tablet comes in a variety of colors, including grey, silver, pink, purple and blue. On the other hand, the 2022 iPad Pro offers silver and grey.

Both Pro panels feature a 120Hz ProMotion adaptive refresh rate, while the iPad Air 5 is stuck with a 60Hz refresh rate. The 2022 11-inch iPad Pro is much brighter than its more affordable sibling, 600 nits versus 500 nits.

However, the iPad Pro 12.9 (2022) outperforms both tablets by switching from a familiar IPS panel to a mini-LED LCD display. This transition promises a number of benefits, including an increase in typical brightness to 1000 nits, while simultaneously improving brightness and color contrast.

We’re only disappointed that the iPad Pro 11 (2022) didn’t share mini-LED technology with its counterpart. Its screen is better than the iPad Air 5, but not by that much.

And while the iPad Air 5 has a single 12MP camera, the 2022 iPad Pros come with dual cameras, a 12MP sensor and a 10MP wide sensor. The latter also includes a ToF 3D LiDAR scanner, complementing the full Pro package while also developing AR (augmented reality) capabilities.

Both the Air and Pro offer 12MP front cameras, although as we mentioned the Pro has a TrueDepth camera that supports Face ID authentication. Both tablets support Center Stage, a feature that keeps your face in the center of the frame during video calls.

Together with a more advanced processor (more on that later), we’d prioritize the iPad Pro for a better all-round camera system than the Air 5.

Apple has boosted the performance of two iPad Pro models by offering tablets with Apple M2 processors that are completely identical to those that run on laptops. It’s not that we’re nitpicking the performance of the iPad Air (2022), which runs an Apple M1 in the same class of laptops.

Beyond just a performance boost, the M2 promises a revamped 2022 iPad Pro “media engine” with better image processing than the one found in the iPad Air 5. This time around, the tablet can record ProRes instead of limited transcoding.

A definite downside is the iPad Air 5’s storage capacity issue. On entry-level models, it offers 64GB, which by today’s standards is simply not enough, especially when the only alternative in configurations is 256GB. The iPad Pro simply doesn’t have this problem, offering it in 128GB, 256GB, 512GB, 1TB, and 2TB configurations.

The other difference for the iPad Pro comes down to offering Wi-Fi 6E and Bluetooth 5.3. This is better than Wi-Fi 6 and Bluetooth 5.0 on the iPad Air 5. However, both options offer 5G connectivity.

And while both tablets are compatible with the Apple Pencil 2, the iPad Pro offers enhanced connectivity and stylus detection when it’s 12mm away from the screen. This means that when you hover your stylus over a text field, it expands for a handwritten note. In this respect, the iPad Pro 2022 is also better at handwriting recognition.

Apple has completely updated its line of tablets for 2022, with the Air and Pro models offering laptop-level performance, sleek design with flat edges, and 5G connectivity.

The iPad Pro (2022) seems (deservedly) to be the better and more capable tablet of the pair. The new Apple M2 promises a noticeable performance boost, with panels that are brighter, smoother, and (at least in the case of the 12.9-inch Pro) more vibrant.

SolidBrain: Full-Service Web Development for Businesses of All Sizes

Get the latest Breaking News with Celebrity Hollywood Life & Biography, Entertainment ,movies, Games Updates. Latest Sports, Tech and Health news. We provide you with the latest breaking news and videos straight from the entertainment industry.